How to start in the Expanse

To enter the expanse, you need 2 things:

1. Inter-Galactic Telemetry Beacon (ITB) which can be acquired by completing the NPC mission string of Marshall Decker in Ikora, Grantham, Sphere.

2. The Alien Language Decoder which can be acquired via the NPC mission string of Ora Atweeke in Deyd, Braran, Verec-Per. (Please take note that you need to have a Superior Head Implant (SHI) equipped for the ALD to be implanted)

Here are the things that you can do in the expanse:

1. Survey – Most systems in the expanse are unlocked using survey drones. You can make them via the Alien IC Factory (Survey). There are three types of survey drones, but I strongly advise that you get the Advanced ones. There is also a scripted way of exploring the expanse galaxy, so you will know what system you can survey next.

Here is a link to the Expanse survey map with the corresponding Astro Navigation Data Points per System. 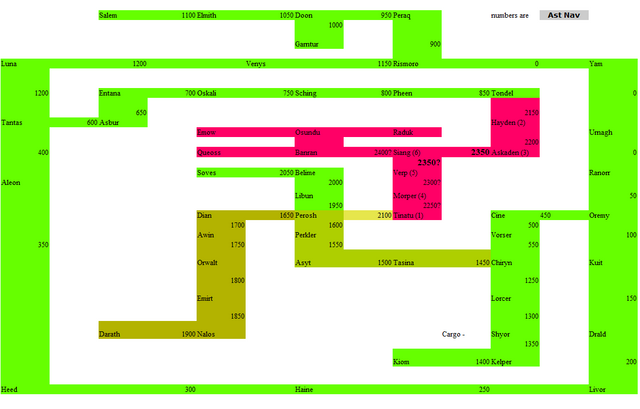 3. Exchange resources for Talas – Talas are the currency of choice for the aliens, and you will need them to buy stuff in the expanse. Several planets in the expanse have NPCs that buy normal resources in exchange for Talas.

4. Alien Certifications – This is one of the reasons for doing number 3 in the list. They can be pricey but well worth it, especially when you reach higher levels. The game will force you to switch to alien equipment at higher levels, and all the equipment requires alien certs before you can use them.

6. Fight the aliens – Everyone can fight them but do so at your own risk. Similar to fighting the AI ships, the real threat level of alien ships do not correspond to the threat level you see when you scan them initially, so they hit harder than normal. Phased shields are a must because of the missiles they use which can penetrate your defences. One should also get the best Aurora Deflector Pod available for their level.

7. Salvaging alien derelicts – Occasionally you will see an alien derelict in some expanse systems. You require an Alien Salvage Cutter (energy based weapon) to salvage them.

8. Expanse Planetary Exploration – I haven’t done this yet but AFAIK you need to use an Alien IC Factory (Explore) to produce mechs to explore the planet and an ECO-UPV (yes, the same one you use to explore planets outside the expanse).

As per Coops:
ECO-UPV’s Awarded
Those amongst you (approx 70) that have been the chief explorer on a planet when it has been completed will find that the Explorers League has awarded you an ECO-UPV for free. It will be in your Specials Store on your ship waiting for you.

The rest of you like me will need to go buy the schematics and craft one. [b]The same ECO can be used in and out of the expanse[/b]. This is one TOUGH ATV. A quick word of warning : the ECO is not indestructible, events and actions whilst exploring will see it deteriorate over time. So start looking into some Repair kits for it as well.

Expanse Exploration Changes
We spent time considering the old method, which was to only use Mechs to explore the Javoran planets. Whilst this worked, it’s a slow process and very costly. So…

Keeping the ‘liberals’ and ‘Alien Lovers’ in mind, you can now explore alien planets using EDK’s! But you also will note that there is a Mech icon 🙂 this means that if you want to ALSO further your exploration you can also use the mechs. Both methods count towards the planet’s total explores, but to be ultra nice to those who make the trek all the way to the expanse using mechs does NOT count towards your daily explores! Don’t believe me, go try it…

9. Naristro By-Back Service – If you get certain alien equipment drops that you can’t use or are inferior to the ones you currently have, you can visit these offices to exchange the said alien equipment for Talas.

I probably missed something, so I am hoping veteran expanse players add information to what I missed in this list.

Post Created by Daemon – Updated and added by Coops